Hopefully, you’ll be yelling BINGO as you fill out this ‘Caregiving Bingo’ sheet, made in partnership with our local NOVA Churches!

Featuring boxes for self-care, prayer, and calling people without internet access or in nursing homes, this caregiving edition of bingo encourages us to look at how we are caring for the needs of every person in the community in this time.

So print this out and use pen or use your best photoshopping skills, but we’d love to see your bingo card! Email a picture of your card to the church office or post it on Facebook and tag @nokesvillecob!

Will you have a bingo? More than one? How many bingos do you think we’ll have altogether? Let’s find out! 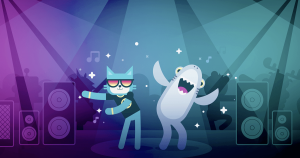 The young adult group from Arlington and Washington City CoBs have invited us to join their mid-week dance party Wednesdays at 5:15 on ZOOM.  (Young Adult is a state of mind  – all are welcome, including children).

To feel comfortable with the “required skill level” (i.e. none), here is a super short video (less than a minute) from a previous gathering – https://www.youtube.com/watch?v=_CFy02cbpiI

This is an opportunity to gather with other NoVA Brethren folks and get your body moving a little bit.  The event is led by Shawn Lent – an incredible human being.  You can find out more about her at:  https://shawnlent.com/?fbclid=IwAR26hP4psCWzfgpLzHmX1IAXkvCLxeB_iqFvKb4E9lt4jrbNmqg-PkKnAfE

Watch for an email each Wednesday morning with the link, or contact the church office.   This is a recurring event, so put it on your calendars.  What a great opportunity to take care of your body and your spirit.

Harper Buettner attended a district Jr. High retreat earlier this year where David Radcliff was the speaker. David is the director for New Community Profit (NCP), a small non-profit organization that works to educate about global social justice and environmental concerns and providing ways to take action. Harper was inspired by a conversation where she learned that it only costs 10 cents to fund a day of school for girls in Nepal and South Sudan, so she collected dimes to show her support! Thank you for your generous support of NCP’s Give A Girl A Chance initiative. She raised $419.00. Way to go Harper!.

Find out more at newcommunityproject.info.

How to become a pen pal to an inmate

A person on DR (Death Row) often spends up to 23 hours each day in a small cell for years and sometimes decades.  Letters can bring a ray of hope to the darkness of DR.  For those on the outside, learning to know just one prisoner can dispel some of the misconceptions and fears about prisons and the people locked away inside.

My pen pal is a black male, 48 years old who has been in prison for 27 years serving 2 life sentences.  He was raised by an abusive, bipolar, addicted mother.  When he was first arrested, his own son was one year old.  They have been trying to build a relationship by phone and he has never met his three grandchildren.  He is a spiritual man and says, “I am not a victim, and I stand in my own responsibility.”

Some positive changes went into effect at his prison in the past year.  As part of that, he has worked outside; he shovelled two city blocks of snow and was paid $ 1.26 for 3 hours work.  He earns 24 cents an hour for 5 days a week and $6 a month for school.  He says, “A good month, I earn $33.”

We have been writing back and forth since October 2019.  Since the pandemic reached peak, I have been seeing reports on the COVID-19 situations in prisons.  I am concerned for my penpal as I have not heard from him since February 10th.  I became interested in the Death Row Support Project since reading an article in the Brethren Messenger.  I then read the book Just Mercy by Bryan Stevenson which convinced me to become part of the project.  The application is very simple and done on-line.  The commitment is one letter a month for a year.  I’m feeling a relationship developing already that I’m sure will last longer than one year – God willing. 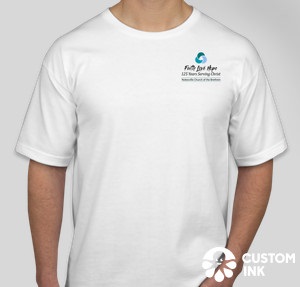 We will be monitoring the COVID19 situation, and if plans need to be postponed or modified, we will send an email, post it on our website, and update our Facebook page. 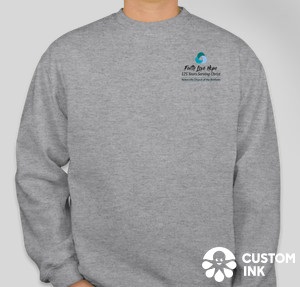 Meanwhile, we are going ahead with the shirt order. T-shirts, polo shirts and sweatshirts can be ordered starting now thru June 1 using the link below. The shirts feature our 125th  Anniversary logo and are available in a variety of sizes and colors. Shipping is $5.00 per order, (save shipping costs by combining orders with family and friends).  Many thanks to Kathy Carroll for setting up the order.  They don’t have a “date” on them, so they can be worn and enjoyed no matter when we gather, and for years to come! 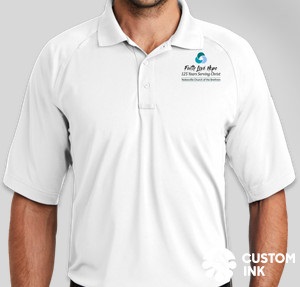 All Content © 2020
Nokesville Church of the Brethren
All Rights Reserved